I had my doubts about how successful this operation was going to be. I was concerned about the cost of getting all the equipment up to the island and back but mostly it was propagation that had me worried. At 72 degrees North the community of Sachs Harbour on Banks Island is well into the geomagnetic polar cap area and I had no idea what kind of conditions to expect. The forecast was for unsettled conditions (the aurora is always unsettled to some degree or another at that latitude) and coming off of the geomagnetic storm a few days earlier I had visions of calling CQ all weekend with no takers.

As it turned out, I was able to get all my freight onto a cargo plane hauling groceries up to the tiny settlement so I only had to pay shipping on my return flight back to Inuvik. With 200 pounds of radio equipment (not including my work tools) that cut $600 off the total cost of the expedition. I probably could have gotten the gear home for free as well but that would have likely meant leaving it behind and I was not about to do that. I had a warm fuzzy feeling watching my equipment being carefully loaded onto an airplane and then two hours later watching it get gently unloaded straight into the back of my truck.


So far I'm the luckiest guy in the world when it comes to expedition propagation. On my April trip to Ellice Island as VX8X I was blessed with 48 hours of extremely quiet geomagnetic conditions that exactly coincided with the timing of my operation. This time as well I had just missed the biggest geomagnetic storm in months and the aurora afterwards was relatively calm for all four days on Banks Island. To top it off there was a even a weak sunspot group to help things along.


My biggest problems turned out to be totally unanticipated. The first glitch was mosquitos. Banks Island is a very windy place and mosquitos are not usually much of a problem but on the Thursday afternoon when I arrived they were swarming en-masse. Now don't forget, I live in the Arctic so I know all about mosquitos but these ones were something else! Of course I didn't bring any bug dope and the only store in Sachs Harbour was closed Thursday afternoon. Fortunately, I managed to scrounge up a bottle of Off! For Kids. Not exactly the heavy duty, 30% DEET stuff that I'm used to but it did get me through the assembly and raising of the antenna without too many bites. I set up right at the airport in Sachs Harbour and had the convenience of a 30-foot high tilt-over lighting pole to mount the antenna and rotator. A pair of ratchet straps were used to secure the 10 foot long piece of pipe I had scrounged on my last visit to Sachs and surprisingly it didn't slip or twist all weekend, even with winds that gusted to 60 knots. 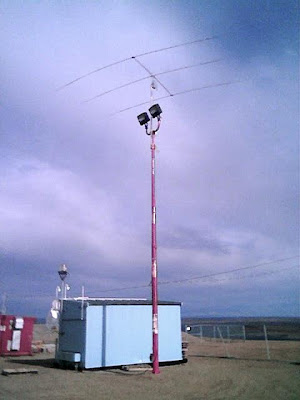 Once again the little TH3JRS baby yagi did the job almost as well as a full-size tribander but at half the cost and a third the weight. The little blue equipment shack was my home for four days.


Aside from the mosquitos (which disappeared after the antenna was up and weren't seen again until it was time to take the antenna down on Monday morning) my biggest pain in the butt (literally!) was my operating position. I had originally planned to take a folding canvas lawn chair with me but it got cut at the last minute to save weight. That left whatever I could scare up on site which turned out to be a cushion and some foam rubber on top of a big cable reel. At first it seemed more than adequate but after a few hours I was quite sore and no amount of adjusting the number of pieces of foam or layering with cardboard helped the situation. I ended up only being able to operate for four hour stretches with a four hour rest in between. With a comfortable chair I probably could have spent 50% more time on the air. Fortunately, I did manage to borrow a rather comfortable folding cot to put my sleeping bag on so I didn't have to sleep on the cold steel floor!


As I mentioned, band conditions were not too bad at all. There were a few periods where not much was heard but more often the band (I only operated 20 meters) was open to anywhere I chose to point the antenna at. On top of that there was tremendous gray line propagation 'overnight' (the sun never quite set there) with very strong signals into Europe around 0600z and then Asia a few hours after that. Once again I confirmed that a small yagi and an amplifier is an unbeatable combination for this kind of operation. I got many, many reports of 20db-over-S9 and was able to turn the antenna to whichever part of the world would generate the best rates (or to whichever part of the world suited me at the time).


As usual, I tried to make sure to cover all areas of the world as equally as possible. Looking back at the log I actually spent more time on Europe and Asia than I did on North America but ended up with 50% of the stations worked being W/VE. Every evening I was able to work 200-300 stations during North American sunset. The rest of the time I spent alternating between Europe and Asia. Propagation to both areas was good but the Asian stations just didn't seem to be around in large numbers and the European stations were just plain hard to work. Three times over the course of the operation I had to give up on Europe and turn the beam elsewhere. Call, then listen. It sounds so simple. Everyone else in the world doesn't seem to have a problem with that so why is it such an issue with some European stations?


One of those times was around 0600z Saturday night during the IOTA contest. I had sacked out for a few hours in the evening so I could get up for Eu sunrise and then work Asia until morning. I pointed the antenna over the pole and tuned through the band working the few stations that were calling CQ. After receiving several comments about how loud I was I easily found a clear spot and started calling CQ myself. I worked several stations in short succession when 'the packet spot heard round the world' went out. Now I'm not sure exactly what happened but I imagine that 95% of the European stations were happily working away on the lower bands when they saw the 20m spot for VC8B come up. At that moment they ALL clicked on the spot, flipped over to 20m and started calling. And calling. And calling. I was reminded of the old Bugs Bunny cartoon where all the animals are fleeing from the Tazmanian Devil and Bugs is trying to find out what's going on but no one will stop to talk to him. I tried to call a couple of stations back but it was just no use. I laughed out loud and just sat back and listened. After two full minutes of non-stop, 20-over-S9 mayhem I finally shook my head and turned the beam to Asia (which from here is 90 degrees to Europe), found a new frequency and just stayed there for the rest of the contest.


Now, in all fairness to the Europeans I also have to mention what happened Sunday evening. The NA sunset peak was winding down and I had just finished putting the last few hundred North American stations in the log when someone mentioned there was a Russian station trying to get my attention from off the side of the beam. I turned the beam and started running Europeans. Now usually I'll run Eu for about 5 minutes before I have to go split frequency and another 5 minutes before I have to start going by the numbers. This time however was totally different. All the stations were perfectly behaved and no one was calling out of turn. I didn't have to go split, I didn't have to go by numbers, it was just smooth sailing. In an hour I put over a hundred Europeans in the log, by far my best run rate to Europe ever. What was so different this time? Beats me. Maybe the professional ops get up early and the lids like to sleep in. Either way, it was a very pleasant way to wrap up the operation.


I shut down after that and went to bed as I still had some work to complete Monday morning in addition to tearing everything down and packing up. Final QSO tally was somewhere over 2000. Logs should be online tomorrow and I hope to have the cards ready to start sending out by the second week of August. 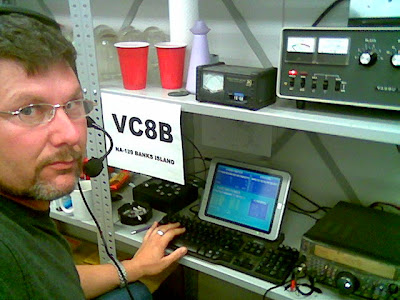 Thanks for the 2nd contact into VE8. This proves the Canada Day contact was not a fluke...
73bob

Thanks for the new one John. My QSL is sent via direct.

Pity some in our ranks can behave like grown ups and show some dignity while calling a DX.

I´m vy happy for the new one John! But i´m sorry for the bad disciplin on ur QRG, it was vy difficult!
73 gl Klaus, DL6MST

Thank you for another rare IOTA John.
Where do you go next?
My direct Qsl request will be going your way pretty soon.

You indeed had a very good signal on 20m on Sunday morning. You were 59+++ when I listened.

Hello John,
Many thanks for the new one!! Your signal was very strong in Japan. I did not believe.
The NA-129 is rare IOTA.
Thanks again!! 73 de Tak,JA7DHJ

HELLO JOHN,
AS I WROTE BEFORE, I CAME BACK TO HOME TO WORK YOU. THANK YOU FOR THIS GREAT NEW ONE! QSL DIRECT OF COURSE.
VY HAPPY!!
PHIL, F6FHO

Thanks again for the home-grown DX!

Thanks for the kind words on my webpage guest link and am so happy you like my QSL. Always appreciate your IOTA operations and getting a new island thanks to your tireless efforts. I hope we hear each other on the air many times in the future. 73 & Aloha from Hawaii!