Looking only at the content of this blog you might think there was not much going on here recently.  That is true to a degree.  I was working 160m pretty regularly late last year and recently I've managed to get on the 17m and 30m bands enough to confirm DXCC on both.  That just leaves 12m and 160m to complete 9-Band DXCC.  I still need 9 more all-time-new-ones on any band to make DXCC Honor Roll but that's just a waiting game.  Only the much-cursed Burundi is not at the top of the most-wanted list but still not confirmed in my log.  It will likely be years before the rest of the rarest-of-the-rare are ever on the air at all.  The time has come, however, to make some big changes.

Somewhat by design and some by coincidence, I have always changed things up along with the progress of the 11-year solar cycle.  I built my first high-performance HF station for contesting and DXing back in 2013 at the beginning of Cycle 24.  As the cycle began to wane in 2017 I optimized the station for working the lower HF bands and I cruised through the sunspot minimum over the past few years without skipping a beat, earning the 5-Band DXCC award and DXCC Challenge.  Now that the sun is starting to awaken again it is time to make changes.

I've been dreaming of building a 2m EME station for 25 years now.  I've built huge imaginary antenna arrays in my head and even started building a tube-type VHF kilowatt amplifier once (it was a fail).  Back in 2015 I started to get more serious about the whole idea.  I completed the hardware and software for the azimuth/elevation tracking equipment.  I found W6PQL's web page and started planning for a solid-state LDMOS amplifier.  Most importantly, I started collecting all the little bits and pieces that I would need to put everything together.  I found a 2000W 50V power supply on eBay for $30.  I scavenged coaxial relays, hardline cable and connectors, aluminum tubing and rod for antennas, and a huge assortment of other odds-and-ends that will all have their place in the final product.  I'm even planning to repurpose the 50W UHF amplifier module that I build a few years ago.

For HF I had wanted to put up my DMX tower and the TH6DXX again but concluded that a more sensible option would be a smaller tower with a 10/12m duoband yagi (built from old TH3JRS parts) and a re-worked 6m yagi.  I really hadn't given too much thought to six meters but then I had a good idea for a small linear amplifier to use on that band and with the optimized yagi it should be good for making EME contacts on the horizon (at least with the "big guns") and working the infrequent band openings, possibly even over the north pole.

In the past my plans had always included my venerable Kenwood TS-2000.  It was the only radio I owned with VHF/UHF capabilities but it had long ago succumbed to the endemic TS-2000 filters failure, ostensibly caused by overheating the ceramic filters when production first changed to lead-free solder.  A couple of years ago however, I was considering a new radio to put in my boat and came across the first information about the then-unreleased Icom IC-705.  It was only a 10 watt QRP radio but I thought that maybe with some outboard amplifiers it might be okay for marine use.  The more I thought about that the more I realized that I'd rather have the IC-705 in the shack and just fix the old Kenwood to use in the boat.  I already had an HF amplifier that only required 50mW drive power and a VHF LDMOS amplifier would likewise require only a few watts of drive.  The 705 also boasted an astonishing array of features like a direct-sampling DSP receiver, touch screen, bluetooth, GPS, DStar, and on and on and on.  The only thing it lacked was full-duplex cross-band receive which I required for working satellites.  That was easily fixed by including a dedicated SDR receiver in my plans.  The FunCube Dongle Pro+ that I already had would work perfectly for this.

Over the past few months I got more serious about getting this all done THIS YEAR.  I relentlessly completed all the detailed design drawings for the controls, feedlines, and antennas.  The concept is a simplified design that will make everything happen with the flexibility to work HF and 6m, satellite, and 2m EME, provide high performance and low-loss, while also protecting the expensive amplifier components.  After innumerable iterations and revisions, all the details have now been finalized and I have almost completed obtaining all the remaining parts required to make everything happen.  Only the IC-705 is waiting to join the party. 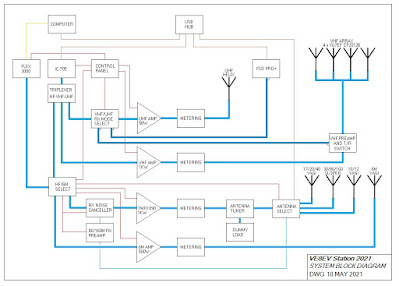 This is how it will all go together.  Blue is RF and red is control lines.  I'm very excited to finally get on with the new build and look forward to blogging about all the individual elements as they come together.  Stay tuned!

Shortly after I wrote my last annual 'DX Year' post in early 2020, things changed pretty fast once all the travel restrictions came into effect from the global pandemic.  Nevertheless, despite the lack of DXpeditions, in November I finally managed to break my two year dry spell and worked JX2US on Jan Mayen Island for an all-time new one #322. 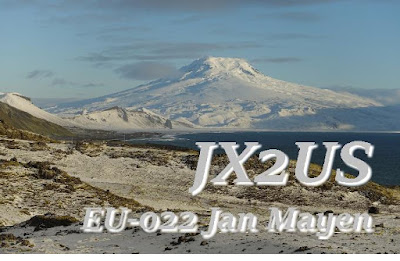 Despite its relative proximity to me, there has not been much activity from Jan Mayen in the last 10 years and I somehow managed to miss every dxpedition and the occasional operator at the Norwegian weather station there.  Ken LA7GIA put in a brief appearance (only a couple of hours) from there in 2019 but was planning a much larger operation for 2021.  Then Eric, LA2US, was posted to the island around the same time the dxpedition was announced, and eventually it was cancelled when Eric announced his intention to make an effort to fulfill the needs of DXers such as myself (which he did admirably!).  I never did catch him on 160m as I had hoped but I did manage a few contacts on 40m and 60m during his time there.

In early February I started to notice that I had amassed almost 1000 DXCC Challenge points and a little push was all it took to confirm enough on LoTW to qualify for the award.  A couple of years ago I had passed on the new plastic 5-Band DXCC Plaque (I ended up just getting the certificate and making my own 'old-school' plaque) but the new plastic DXCC Challenge plaque looks pretty nice hanging on the wall of the shack here. 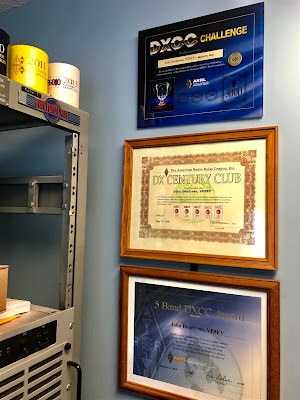 I spent a lot of time on 160m this season (September through December) and picked up a dozen new ones there to bring my total up to 70 confirmed on that band.  Those four months are really the only productive ones for DXing on 160m from here.  I'm not sure why but long-distance 160m propagation always tanks right after the new year even though we still have lots of dark hours left.  It will be interesting to see what happens next season with the increasing solar activity.  I'm not expecting conditions to be very good on Top Band from under a mostly disturbed auroral oval.

That said, in keeping with the start of the new solar cycle I'm already making plans for higher bands and some other interesting activities.  Stay tuned!