As Good as it Gets

As regular readers might know, propagation at this latitude is always dominated by the aurora. Right overhead almost all the time, it seems that HF conditions here only seem to vary from "poor" to "nil". As this solar cycle started to ramp up (finally!) it seemed that things got even worse as the increased activity stirred up the aurora more than it improved propagation. Finally, though, I think we’ve reached the tipping point where the solar flux is high enough that signals are able to push through most of the auroral disturbance and thanks to a rare lull in the geomagnetic activity this past week the propagation has been absolutely astounding!

I’m in the process of moving so I haven't bothered to put the yagi back up after taking it down in July. With only a 23ft non-resonant vertical as a backup antenna I haven't been very active lately. Most of my contacts have been limited to the odd JT65 or CW QSO in the evenings. It was becoming rare to even hear stations on SSB (never mind trying to actually work them!) and I was beginning miss the days of zero sunspots and zero auroral activity when I could at least count on 20 meters to be open for a little while each day. Last weekend, though, with the sun spot numbers firmly in the triple digits and the solar flux index around 150, my perception totally changed. 10m and 12m were both open late into the evening here and 15m and 20m seemed to be going around the clock.

Friday evening I went out to the shack and was surprised to hear the T32C Kiribati expedition on 10m SSB. I easily worked them and then heard them again on 12m. And worked them. And then again on 15m. And worked them. In fact, just in the space of 90 minutes I had them in the log on 8 different band/mode combinations! With a just couple of hours again on Saturday evening and an early morning excursion Sunday for the low bands I had them on every band except 160m and a total of 18 band/mode slots all in one weekend. I’m usually happy just to make any contact with a big dxpedition. A couple of years ago I blogged about chasing the K5D Desecheo group and back in January I spent almost two weeks trying to work the VP8ORK expedition, only managing to eke out a single ESP-strength CW contact on 20m the one day that I could even hear them. And that was with the yagi and the amplifier!

According to the scientists predictions, this is it: the peak of cycle 24. Hopefully these conditions will last at least for the next several months. I sure hope so because the geomagnetic activity peak usually lags the sunspot peak by a few years. The forecast for this latitude a few years from now could be pretty gloomy... 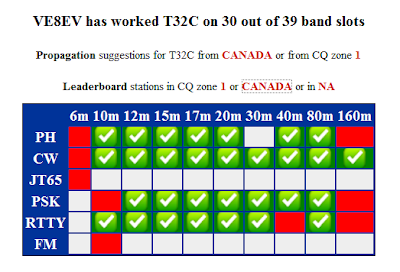 The amazing conditions continued for the rest of the expedition!
Posted by John Boudreau - VE8EV at 6:46 PM 2 comments: