The special callsign VC8B was authorized today for the Banks Island expedition. I'll be operating from Sachs Harbour, NT from July 24-27 (UTC) including the RSGB IOTA Contest. Activity will be exclusively SSB, mostly on 20m which, aurora permitting, should be open round the clock. Will watch for openings on 15m and 10m as well.

I'll post any updates here but I'm not anticipating any problems unless there is delay for weather, likely fog, which is common that time of year.

With the torrent of VX8X cards finally slowing down to a steady trickle I thought I'd write a bit about QSL cards. When you stop and think about, exchanging cards is kind of a strange addition to a hobby that's mostly about radio and electronics. Now that contacts can be confirmed by ARRL's Logbook of the World and e-QSL I wonder how much longer hams are going to exchange paper through the mail (or bureau)? My guess is ...forever! Here is my perspective on this fascinating aspect of our hobby.

It's Better to Give Than to Receive (or is it?)

I've sometimes had mixed feelings about QSL cards. When I first started out years ago, I diligently QSL'd most contacts direct. I remember the thrill of seeing the envelope in the mailbox coming back from some far off country and adding cards to my collection. Then the bureau cards started coming. Every few months another big bundle of cards would arrive and I would laboriously reply to them all. It didn't take me very long to pare down my own QSL requests to only needed DXCC entities or other rare contacts and after many years I've finally perfected a system so that replying to cards isn't a chore.

I think that a good question for exam pools around the world would be "What is the size of a standard QSL card?" The answer, of course, is 5-1/2" x 3-1/2" (or 140mm x 90mm). In every bundle of cards I receive there are always a few that are larger than all the rest. These are the ones that get all tattered and dog-eared during handling, don't fit in the card holders, don't fit into small envelopes, make it difficult to flip through the pile looking for a specific card, etc, etc.

There's lots of info out there on the right way and the wrong way to send a QSL request. I don't really think there's a 'wrong' way to QSL but sometimes I wonder what people at the other end are thinking when they post their request. Here are the things I think about when I'm processing cards:

Plus: SASE (Self Addressed Stamped Envelope)
Minus: SASE with US postage stamps. Hello, US postage only works in the US!

Plus: Request with SASE or IRC or greenstamps
Minus: Overseas QSL request with no postage and no reply envelope.

QSLing is expensive. Last month I spent close to $1000 on cards and postage (mostly postage) replying to QSL requests. My direct cost to reply to a QSL is $0.14 for the card and $0.98 for postage to USA or $1.65 for overseas. I don't think it's unreasonable to ask for at least 1 or 2 greenstamps or an IRC to cover the costs. The 'Final Courtesy...' thing was invented by US hams back in the days when a stamp cost a penny and a really busy station made two or three hundred contacts a year. Every contact was special and it was no big deal to swap cards afterwards. I'm in the position that everyone wants a VE8 card but I really don't need another W6 or W7 card for 20m SSB. So, I'll spring for the cards (and the time!) but you guys buy the stamps, ok?

OK, so now that I've let it slip that I have Washington state confirmed on just about every mode and every band from DC to daylight, let's talk about what cards really are special. There's a lot of factors that make any one contact more special than others. I think to be really special the contact represented by the QSL card has to be irreplaceable. I guess QSL's from deleted entities would qualify although the actual land is still there, just called by a different name. If you're getting on in years (as many hams are) that rare DXpedition contact could be the last chance you'll get but it might come around again. When I looked through my own collection, I was surprised that the most precious cards have nothing to do with DXCC. Here's the ones that I drag out to show people whenever the subject comes up (mouse over the images to see the backside):

Back in the 80's and 90's NASA flew the Shuttle Amateur Radio Experiment (SAREX) on many shuttle flights. With the exception of Challenger (which was lost before I was licensed) I managed to work all four of the remaining orbiters (Columbia, Atlantis, Endeavor and Discovery) before SAREX was cancelled in 1999 and changed to an ISS based program. The really special part for me is that from this latitude (68 degrees N) only a few high-inclination shuttle flights were even visible from here and then they only scraped across the horizon once a day for few minutes at a time. 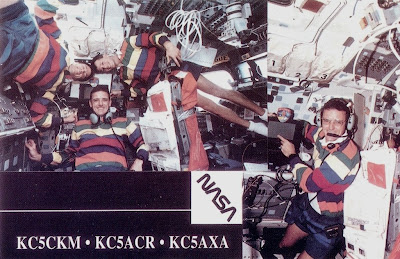 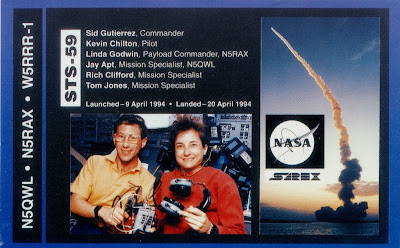 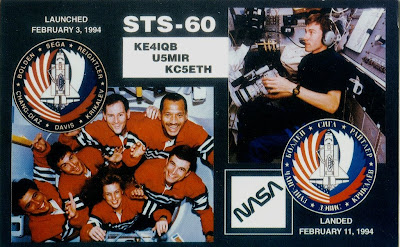 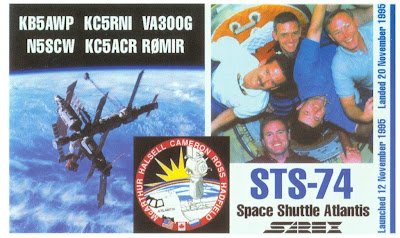 Just because I live here doesn't really make VE8 stations that much easier to work. They're still rare as hen's teeth. In all the time I've operated from up here I've only worked a handful and only managed to pry a QSL out of even fewer. My favorite from the VE8 collection is VE8RCS, the now-QRT club station at Canadian Forces Base Alert on the northern tip of Ellesmere Island. 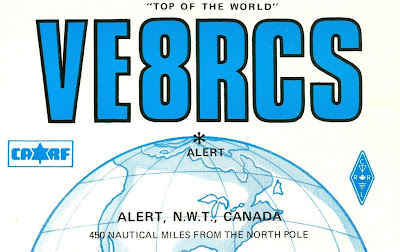 Hams and non-hams alike are always wowed by this one. It was my first (but hopefully not my last!) contact via Earth-Moon-Earth (EME) or moonbounce. Dave, W5UN did most of the work. I was only running 50 watts to a pair of 13-element yagis on 2 meters. 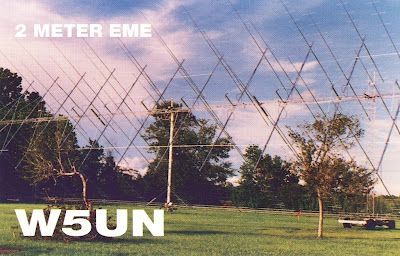 That's all from the Arctic for now. Expect a formal announcement this week for my July expedition to Banks Island, NA-129 and I'll do my very best to get my QSL into your special collection.