How I Spent My Summer Vacation

With Canada Day this year falling in the middle of the week right after the Field Day weekend and my kids coming back from school for the summer right after that I decided it would be fun to take a few extra days off and go camping. Camping ham radio style, that is. We had planned to set up for Field Day at the local campground so I just stayed there until the July 1st holiday. Ever since the warm weather arrived I’ve been perfecting the mobile shack and this would be the first outing for the new configuration.

First up was a new HF antenna and mast. After a whole winter of raising and lowering the thirty foot DMX tower with the TH6DXX on it I finally concluded that just wasn’t a practical solution. On the air it was great but it was just too big and heavy to safely and conveniently set up and tear down. It took every bit of muscle from two strong men to get it all into the air and at every step of the operation there was the potential for something to go disastrously wrong. Instead, I decided to go with a MUCH smaller and lighter TH3JRS mounted on a 30ft. two-piece aluminum pole. As I have written before, I think the TH3JRS is a great design, it’s just a shame that MFJ has put their trademark stamp of cheapness on it. I used to have one of the ones built by Hy-Gain before they were bought by MFJ. The original construction was heavier and of superior manufacturing quality. The second-hand one that I had was up for years without any problems before it was taken down and sold when I went QRT in 2000. What the new ones do have going for them, though, is that they are very light. So light that they can be easily installed by one person and that is what I needed for island expeditions and for the mobile shack. A lightweight (and low cost!) TV antenna rotator completes the setup for an easy-up HF yagi installation. I also have a 4-element yagi for 6m fixed-mounted lower down the mast and pointed SE that I’ll have up during the summer E-skip season.

Next order of business was VHF/UHF antennas. I remember the first time I learned that the aurora was more than just pretty lights in the sky. I’d been happily DXing away for a few months with my new license hanging on the wall when the first spell of active geomagnetic conditions occurred. I thought my radio was broken! After hearing nothing on HF for two weeks I decided to give amateur radio satellites a try and found they were the perfect solution for getting out under all conditions. Once I got back into the hobby it didn’t take long to remember my original rationale for the satellite gear. A new lightweight aluminum tower was mounted in place of the original DMX tower and I built all the workings of the az/el mechanics 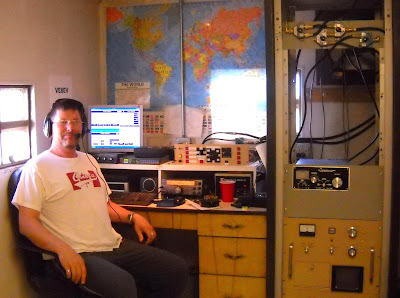 VE8EV at the controls wearing my Canada Day contest shirt.
The main operating position is centered around a Kenwood TS-2000 and an ex-commercial CMC BH30 1.5kW amplifier. An old airfield lighting control panel handles bandswitching the amplifier, audio and keying I/O between the radio and the computer, antenna relays and anything else that might need a button or a selector switch. A 35A 12V power supply, a trio of 40aH gel-cell batteries and a PowerPole distribution panel handles all the DC power requirements. The second operating position has a Yaesu FL2100B amplifier and space for Wally (VE8DW), or anyone else to set up their equipment for a multi-op situation.

Composite shot of the second operating position, bunks and the 'kitchen'

I wrote separate posts about our Field Day adventures and the RAC Canada Day contest. HF band conditions were generally lousy due to the elevated K-index but outside of the contests I did manage to catch a few band openings including one to Africa where I worked TN5SN (Congo) for a new one and heard TL0A (Central Africa) for a moment with a good signal but he QRT’d before I even got a chance to call him. Between HF activity I worked the satellites and kept an ear out on 6m. I heard a few VE6 and VE7 beacons but CQ calls on 50.125 failed to drum up any activity. 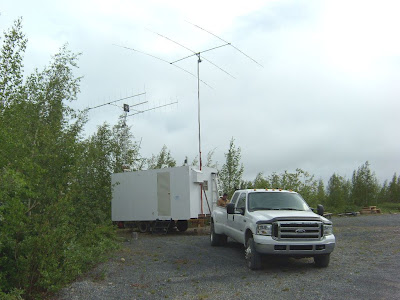 At the campground with all the antennas up except the 6m yagi.
I ended up waiting until it started raining do that part...


The weather was a mixed bag. Cold and raining on Field Day weekend with temperatures just above freezing to hot and sunny at mid-week with a temperature of 21C (72F). Through it all the shack was perfectly cozy and comfortable. The amplifiers kept it warm during Field Day and the exhaust fan kept it cool during the Canada Day contest. In between I only had to run the electric heater for an hour or so on Monday to take the chill off. All in all the camping trip was a nice break from the routine and the perfect way to start the summer.

Look for me this month from Banks Island during (and on either side of) the IOTA contest as VC8B.

Great project John! At these dates, i will be in holidays into the southern part of France; but I will try to follow u on the net with my mobile phone and if i see you're active from NA-129, I will go back home just to try to work u (500kms) and after i will return to join my wife! You see it's not easy here but of course, i understand it's a greater effort for you, absolutely different hi
GL John I'm sure that many islands hunters will be happy with u!
Phil F6FHO FRANCE