Radio conditions this month have been dismal.  I mean really, really bad!  As we head into that awful downward slide of the solar cycle, we get increased solar nastiness and incessant aurora.  Most days there's nothing on the radio at all and, thanks to the 27 day solar rotation, we can expect these exceptionally lousy conditions to recur over and over for most of the winter.  The only bright spot is that this year the CQ Worldwide SSB Contest just happened to land right in the middle of a tiny lull in the geomagnetic conditions.  There was a big asterisk on the nice forecast, however, as it was also calling for active geomagnetic conditions due to the arrival of a CME that was scheduled to hit the Earth around mid-day on Saturday.

I wanted to put in a full effort this year so I got as much rest as I could in the days leading up to the contest.  My plan was to go as long as I could and then grap a ninety minute nap.  I hoped that between that and drinking enough coffee I could work at least 40 out of the 48 hours of the contest.  This time I didn't want to miss out on all that interesting propagation in the middle of the night.  It can be a lot of fun up here when there's no aurora to absorb all the signals and a big contest with lots of stations on the air around the clock is a great time to take advantage of our unique location at the top of the world.


I had a nice long nap Friday afternoon and was on the air for the opening bell all bright-eyed and bushy-tailed.  As usual, I started the contest beaming out to Asia but, unusually, 10 meters was open so I started there.  I did pretty good business in that direction for the first couple of hours and then dropped down to 15m for another hour of steady callers from across the Pacific.  When things started to slow down I pointed the big TH6DXX over the pole and switched to 20 meters.  With almost no aurora the band was wide open to the Eastern hemisphere and for the next several hours I ran a continuous flow of callers from the far side of the world.  At 0500z I decided I'd built up a nice QSO base so it was time to do some multiplier hunting.  I dropped down to 40m and worked a handful of stations but it was still a bit early for the lower bands. I went back up to 20m and S&P'd my way through the entire band picking up everyone I could.  A quick check of 15m revealed lots of action there so I spent the next two hours sweeping back and forth working everyone I heard and then back to 20m for another hour cleaning up anything new since my last go through there.


By 0900z I had worked my fill of the high bands and it was finally time for the next item on my "middle of the night to-do list": the low bands.  Being the most affected by the absorption in the polar regions it is a rare treat indeed to have good conditions during a contest and to still be awake late enough to take advantage of them.  Conditions weren't great but 40m was at least OK and I had little trouble working all the continents.  Not so much on 80m but at least I made a few contacts.  Finally at 1100z I was ready for a break.  I decided to grab a bit of sleep, satisfied that things were looking pretty good after the first night and if the CME arrival wiped everything out on Saturday at least I'd had some fun while I could.


Three hours later I was back at it again.  20m was absolute bedlam as all the "weekend warriors" hit the airwaves and 15m was in and out so I spent the whole morning hopping back and forth between 40, 20, and 15m waiting for conditions to improve enough to try running.  Shortly before 1800z the stateside signals on 15m were staying strong and everyone was answering me on the first call.  Run time!  The rate meters immediately all turned green as I took off with a 200-hour beaming down the middle of North America. I was ready for the CME to arrive and spoil everything but the bands hung in there and for the next three hours I filled the log with 2-pointers. When I finally got pushed off my frequency I did a quick mult sweep and then turned the beam out to the Pacific. I was rewarded with another nice run, but this time mostly 3-point JA's.  Not quite the same "set your hair on fire" rates as the Americans but steady for another 3 hours.  At midnight zulu I hardly missed a beat as I dropped down to 20m and carried on the same way.  Unfortunately, I was already starting to feel the effects of the lack of sleep the previous night and after another couple of hours running I had to sneak off for a quick catnap.


I came right back to the same frequency two hours later, turned the beam North, and picked up right where I left off.  Over the next two hours I'm sure I worked every single station in Zone 16!  At 0600z a quick check revealed a few signals on 10m.  I spent way too much time trying to make some "midnight magic" happen but all my efforts only resulted in three central Asian mults (zone 17/18/22) on 10m before the signals faded.  After I gave up on 10m I tried to find something else productive to do but I soon realized I was fading as well.  I don't know if the mid-evening nap made things worse or not but it sure didn't help. I really wanted another night like the previous one but, as motivated as I was, it just wasn't happening.  I knew I could probably run Europe all night on 20m but the QRM and splatter was just too much for my internal DSP.  With my concentration gone I finally stood up, turned off the lights, and stumbled off to bed. I didn't even set the alarm!


Back in the shack the next morning I suffered through the usual morning doldrums by S&Ping through the bands.  20m was still a mad house with signals stacked two and three deep from one end to the other but, surprisingly, 40m was still somewhat open even though it was almost noon here. Only a couple of the Europeans were able to hear me but I did grab several Asian mults and even 9K2HN somehow pulled my signal out of the noise for the double-mult!  In the afternoon I kept an eye on 10m hoping it would open to North America but it never really did so I just stuck to 15 and 20m.  Alternately running and mult hunting I would briefly get some good rates going but the QRM was so intense that eventually I'd get shoved off my run frequency and have to start all over.  I had my last good run going on 20m but about a half-hour before the end of the contest I saw a BY station that I couldn't hear get spotted only 1 kHz above me and I knew I was done for.  Sure enough, within minutes the hordes descended right on top of me and I had to move.  With not much time left I decided to just hunt multipliers for the last few minutes.  Signals were great out to the Caribbean and everyone I called answered right away.  With only a couple of minutes remaining I quickly swung the beam Northwest and in the dying moments worked 9V1YC and 9M2YAA to tie the ribbons on.


I had a great time and there were lots of high points:


The only low points:
I'm really glad I made the effort to get on for this one.  I'm not 100% sure how the sun is going to affect the rest of this contesting season but in the near term I rather suspect that Sweepstakes CW is going to be a total bust.  On the other hand, there's a sliver of hope that Sweepstakes SSB, being just 27 days away, might also fall into this same tiny little window of decent propagation.  Let's hope it does! 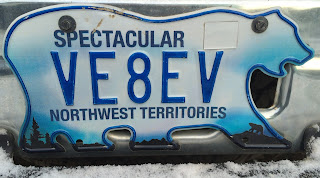 This is a very nice report! Thank You for QSO. Unfortunately i didn't have antennas for low bands, just monoband dipoles for 20,15,10 meters, hanging on bamboo poles, so every time when I wanted to change the band I had also to change the antenna. 20 meters works really nice by the night. I wanted to operate just 24 hours, and most of the time i used for 10m by the day time. It was really nice contest- ignoring operators with wooden ears calling incessantly despite the fact that you call few times another station and "kilowatts giants" displace you from your frequency, running 1kHz higher or lower, after someone nice just spot you on dxcluster ;)

Hope to hear You soon without the splatter ;)
all the best!
Mike TY4AB

p.s. You can read more about me on http://www.rainbowtruck.pl