Regular readers here might think I sound like a broken record but contesting from this far north is all about the aurora. Now that the sun is starting to wake up from its lengthy slumber the increased activity is both improving propagation and stirring up the aurora in equal measures. I started checking the geomagnetic forecasts a month before the contest and everything said October 29-31 would be three of the quietest days this month. With a positive auroral outlook, our goal for the contest was to double our Multi-Two NT (VE8/VY0/VY1) record set last year and it looked like everything was on track. In addition to myself and VE8DW we had not one but TWO new operators on the roster. VE8GER had been active since this time last year and VE8NE just moved to town and had never operated HF before but was willing to give it a try. We had a new Mosley S-33 yagi for 40m and 20m (it also does 17m) and I arranged to borrow a 50 foot trailer-mounted crank-up tower to hang it from. The TH6DXX and low band vertical were still up from last season and my mobile shack trailer had a number of upgrades added over the past months. In short, we were ready to make some noise!

The one guest operator who is never invited but ALWAYS shows up is Murphy. He arrived early this year so he could help out the week before the contest. His first contribution was (relatively) warm weather. Good for working on antennas and such but it also kept the river from freezing enough for VE8GER to get to town from his cabin out in the bush. Scratch one operator. Murphy also wanted to help out with the propagation. The Wednesday before the contest the geomagnetic forecast for the weekend changed from "mostly quiet" to "active at high-latitudes due to arrival of a CME". Being one operator short was not a show-stopper but active geomagnetic conditions surely was. I could easily foresee having the K-index at 5 for the whole contest and only hearing a few fluttery signals on 20m from guys that couldn't hear us calling. Been there, done that. The final blow was on Friday afternoon. After helping to get everything set up on Thursday, VE8DW had a family emergency come up and wouldn't able to operate on the weekend. The only good part was that after his triple-play of bad news, Murphy eventually left to help out others (did he show up at your station on the weekend..?)

As always, there wasn't anything that could be done about the propagation. We'd just have to fight through the aurora and hope for a few openings. I thought about going SOAB but I knew VE8NE was still keen to get on the air so I decided to be the good Elmer and planned for Multi-Single. He wasn't going to be available during any peak hours but would still be able to get his feet wet chasing multipliers on 20m for a few hours at night while I cruised the low bands. After a quick read of the M-S rules we were more-or-less ready to go at 0000z. My plan was simply to run on 40m during the night, 20m during the day, spend every other hour chasing multipliers, and hope the aurora held off long enough to at least get a few hundred contacts in the log.

As most plans are wont to do, mine did not survive first contact with the enemy. At only fifty feet high the new yagi was just "ok" on forty but the band sounded like daylight-20m with wall-to-wall signals one end to the other. I couldn't find a decent place to get a run going but didn't have much trouble S&P'ing and since it was just the start of the contest there were more than enough stations to keep me entertained. There was not much activity on 20m but VE8NE managed to put a handful of mults in the log including a VU and an S79, both of which were the only ones heard during the contest. After midnight local I dropped down to see what was happening on 80m and 160m (not much) and when VE8NE left I spent the rest of the night jumping from band to band to band, always being mindful of the "10-minute rule". The bands were all still going strong at 5am when I finally hit the bunk for a 3-hour snooze. 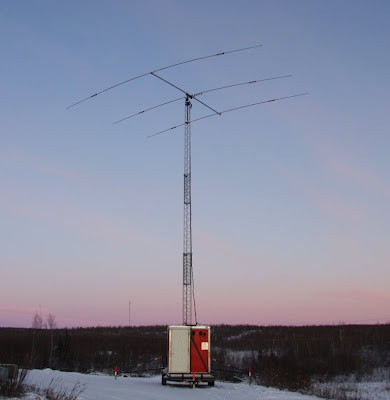 
The next morning I got up expecting to see the K-index at 5 but it was still zero. I guess the earth managed to get out of the way before the CME arrived because the forecast had now been revised to "quiet" all weekend. Sweet! The TH6 was still pointed at Europe from the night before so I found a quiet spot on 20m away from the USA wall-of-noise and started running. And running. And running. By early afternoon the Eu run finally started to slow down so I turned the antenna stateside and started running guys on 15m. And running. And running! I didn't eat. I didn't check the packet spots. I didn't visit with the visitors. I didn't answer my phone. It was already early evening when I realized that other than a quick mid-afternoon excursion to S&P a few stations on 10m (ten meters!!), I had been running stations for twelve solid hours! The QSO count was already over 1000 and the score had even surpassed last year's final Multi-Two tally. The rest of the night was mostly spent mult hunting but I did manage a nice hour-long run in the wee hours on 40m, my first ever on that band. 80m and 160m were in much better shape than the previous night. Only two Europeans were worked on 80m but I did manage to get all of the "easy" zones (1,3,4,31) on both bands as well as a handful of South Pacific multipliers. Thanks to KL7RA for moving to 160m to get me the double-mult for Alaska/Zone 1 and then on a whim, I decided to call CQ on 160m for a little while and see if I could scare up a W6 or W7 for the zone 3 mult. Imagine my surprise when RT0C called me from zone 19 for the double-mult followed shortly thereafter by W7AT for zone 3. An hour or so after that I checked 160m one more time and found KH7U for my last "easy" one before I turned in for the night.

The next morning I poked around over the pole on 15m and 20m but never got anything big going. 15m opened early to North America and the Caribbean so I found a spot and started running again. After the 200/hr rates the day before I ran at a somewhat more relaxed pace this time. Every hour or two I'd slip away to grab a few mults on 20m and when 10m opened up (10 meters!!) (AGAIN!!!) I managed a little mini-run there to pick off all the "easy" zones on that band. Special thanks to VE8GER, still out at his cabin, for finding me to provide the double-mult on 10m. As soon as N0KE called in from zone 4 it was back to the endless run of stations on 15m. The last hour is usually tough going so I decided to just point the beam out west, find a nice quiet spot on 15m outside the US phone bands, relax and run JA's and Pacific stations for the last hour with a few quick QSY's here and there to pick up a final few multipliers. As the last minutes went by, the 15m QSO counter ticked over 1000 beating the 20m count by 150 Q's and marking the first time in my experience that a band other than 20m had the most contacts. Final numbers were 2058 Q's, 300 mults, and 1,509,300 points, breaking the 22-year old NT Multi-Single record by almost a million points.

Thanks to everyone for calling in and being there to be called.
73
John - VE8EV 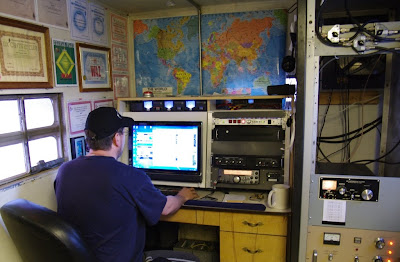 Backing up the logs right after the contest ended. I haven't even turned the amp off yet.
Posted by John Boudreau - VE8EV at 3:21 PM

Good job John! Nice to work you again. Thanks for getting on! Hope to see you for SS SSB and CW WW CW.

Unfortunately, we missed z1 on 15m despite looking for it, and calling both of your mornings towards KL. How many EU did you work on 15m?

Anyway, thanks for the nice writeup and your positive experiences.